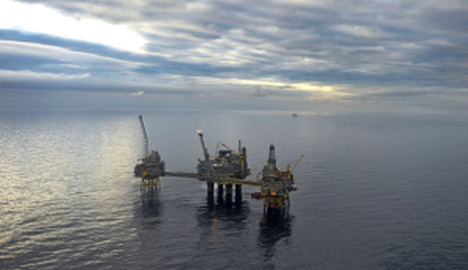 The Oseberg field centre in the Norwegian continental shelf. Photo: Harald Petterson/Statoil
Dagens Naerinsliv, citing a labour representative, said the cuts would hit engineering staff, particularly those drilling and maintaining wells, as well as administrative staff.
"We are working on reinforcing the productivity within the company and that could have consequences in terms of jobs but it is too early to speculate on their number," Statoil spokesman Jannik Lindbaek told AFP.
The cuts are part of a programme to generate $1.7 billion in annual savings from 2016 that Statoil announced last year when oil prices were still above $100 per barrel.
Oil prices have since fallen to under $50 per barrel, pushing energy companies to accelerate cost-cutting measures and suspend or scale back investment.
In February, when it announced annual profits had been slashed in half due to tumbling oil prices and heavy write-downs, Statoil also announced a 10 percent cut in its $20 billion-investment budget for this year.
Statoil, which went into the red in the second half of the year, also warned in February that an 8 percent cut in staff levels last year to 22,500 could be followed by further staff reductions.
Url copied to clipboard!