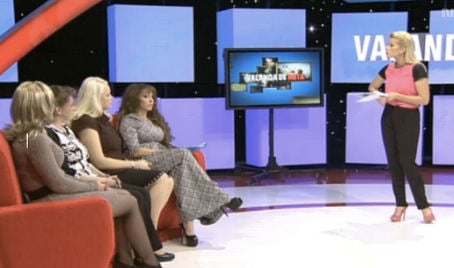 A clip from the debate on 'an hour with Ruta'. Photo: LNK
The Lithuanian talk show ‘An Hour with Ruta’, on the independent LNK channel, last week ran a slot on Norway’s controversial Child Protection Service (Barnevernet), arguing that it was deliberately targeting Lithuanian children.
“In Norway, Lithuanian children are taken away from their parents. Lithuanian children in Norway are a sought-after commodity,” the programme began, before interviewing Neringa Ozolina, a Lithuanian based in Ålesund, who has become an authority in the Baltic state on Norway's child protection regime.
“The birth rate is the lowest in Norway,” Ozolina told the show's host Rūta Mikelkevičiūte. “Inbreeding in Norway is the greatest in the world, and the same is true of the percentage of children born with Down syndrome and other birth defects.”
The issue has come to prominence in Lithuanian this year largely on the back of press coverage of the struggle of Gražina Leščinskiene, a Lithuanian whose son Gabrieliaus has been taken into care by Norway's Child Protection Service, to get her son back.
According to Leščinskiene's lawyer, Gabrieliaus was seized after he apparently displayed "sexualised behaviour", including frequent visits to the bathroom and obsessively washing and sniffing his hands.
Dag Halvorsen, Norway’s ambassador to Lithuania, said the controversy over Lithuanian children taken into care in Norway was now taking up more of his time than any other issue.
“This issue has been the biggest news story in Lithuania this year, and has taken up most of our time in recent months,” he told Norway’s NRK channel.
“It is said that there is a history of inbreeding in Norway and that there is a high incidence of Down syndrome among Norwegian children. They argue therefore that it is important for Norwegian authorities to obtain fresh, foreign children, such as Lithuanian ones, to strengthen the genetic material.”
Halvorsen has recently hired a Lithuanian public relations company to try and counteract what he sees as Lithuanian misconceptions about Norway's child protection regime.
Norway's Child Protection Services is the subject of almost non-stop controversy over its decisions to take the children of foreign parents into care.
In February the president of the Czech Republic, Miloš Zeman, accused it of behaving "like the Nazis" by not allowing the mother of two Czech boys seized to talk to her children in Czech.