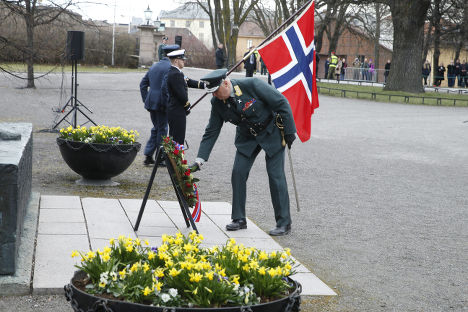 King Harald lays the wreath at the foot of Norway's National Monument. Photo: Terje Pedersen / NTB scanpix
Harald laid the wreath at the foot of Norway's National Monument, erected in 1970 to commemorate those who died during the 62-day invasion, at 9am on Thursday morning.
Harald himself was just three years old when Germany attacked on 9 April 1940, dramatically fleeing Norway along with his mother Princess Märtha of Sweden, who was Norway's Crown Princess, and later spending the war in Washington DC.
He was accompanied at the wreath-laying by Prime Minister Erna Solberg, Defence Minister Ine Eriksen Søreide, and Admiral Haakon Bruun-Hanssen, Norway's chief of defence.
Olemic Thommessen, the president of Norway's parliament gave a speech in which he warned Norway not to forget the lessons of the invasion.
After the wreath-laying, Søreide moved inside the fortress where she officially opened a new permanent exhibition, "62 days: the battle for Norway”, at the Defence Museum.
Below is a list of some of the events taking place today:
9.35am: The Norwegian Parliament, or Storting, opens up for a day of seminars and an exhibition at its Eidsvoll Gallery.
10am: A free ferry service will bring visitors to Oslo’s Oscarsborg Fortress, where the there will be hourly guided tours. The island fortress is famous for launching the torpedoes which sank Germany’s flagship cruiser the Blücher.
Ine Eriksen Søreide and Haakon Bruun-Hanssen will move from Akerhus Fortress to continue their commemoration on the island after the wreath is laid.
13.50pm: A boat leaves from Fredrikstad to take visitors to the memorial service on Rauøy fort on the Oslofjord,  one of the first places where fighting broke out. A second boat will leave at 15.40 from Engelsviken.
18.00pm: The Norwegian Parliament will hold its official commemoration of the day in the Great Hall at the Folk High School in Elverum, a few hours north of Oslo. It was here that the Norwegian Parliament signed the Elverum Authorisation which gave the government authority to make decisions without parliamentary backing, later allowing the government to assert legitimacy in exile.
Url copied to clipboard!