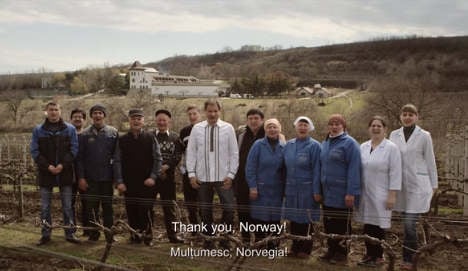 The Moldovan employees featured in the video, with the old vineyard building behind. Photo: Screen Grab
The video shows the company’s employees, farmers, and factory workers one by one thanking Norwegians for saving their jobs, and ends with them all shouting ‘Takk Norge’ in unison.
“It means a lot to us, especially after Russia banned Moldovan wines,” a farmer says, the vineyards stretching out behind him.
“Of course, the ban was not politically motivated”, a woman in a packaging plant says with an ironic smile.
According to Nettavisen newspaper, Norway now imports half the amount Russia did before the ban, despite having a population of only five million, compared to Russia’s 143 million.
Url copied to clipboard!