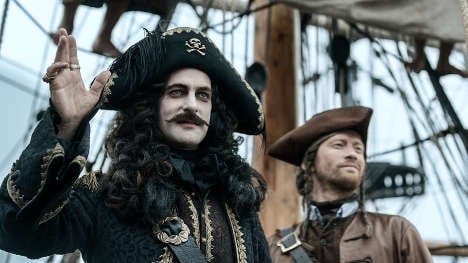 Captain Sabertooth as played by Kyrre Haugen Sydness. Photo: Storm Films
“We have now sold the film to over one hundred countries and we still have more to come. We expect worldwide distribution,”  Frederick Howard, Managing Director of Storm Films told NRK.
Storm Films and its two co-producers blew 50m ($6.2m) Norwegian kroner on the lavish production, making it the most expensive children’s film in Norwegian history.
According to IMDB estimates, the film has already made a small profit, generating some $7m at the box office, primarily in Norway were the film was the fourth most successful film, with 365,902 admissions in 2014 following its September release.
It has so far opened in nine other countries, drawing in some 40,000 viewers in Sweden, and small audiences in Estonia, Turkey, UAE, Iraq, Jordan, Bahrain and Oman.
A lot now hangs on whether it can win over a large audience in Germany when it opens on 7 May.
“Success in the German film market with hundreds of thousands of tickets sold would be fantastic. In addition, there will be a strong pretext to go ahead with several more films in the series,” he said.
Url copied to clipboard!