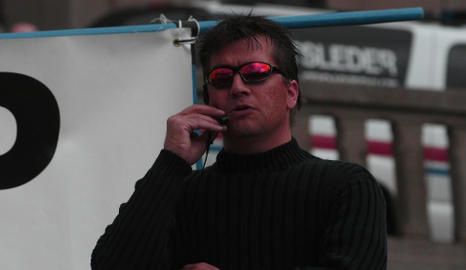 Ronny Alte. Photo: Ronny Alte's blog
Ronny Alte, a long-term anti-Islamist who previously led the Norwegian Defence League, published the post about Øivind Bergh, a labour party politician and professor at Norway’s Institute of Marine Research, on his blog in February 2013.
The post, which was written by Rolf Erik Hanssen, accused Bergh of being a “paedo-sympathizer”, “a “supporter of the paedo writer”, “the paedo”, and “a rotten paedo”.
The district court in Tonsberg ordered Alte to pay 75,000 kroner in damages, and 155,747 kroner in costs after ruling that a blog should be given the same legal treatment as any other media.
Bergh said he was happy with the sentence, which he argued was a matter of principle.
“If it became acceptable to accuse people of criminal and immoral acts without any reason, many people would no longer be willing to engage in debate,” he said. “With this ruling, the court has really put its foot down.”
Alte was one of several far-right figures called to give evidence at the trial of mass murderer Anders Behring Breivik in 2012. At the trial he retracted an earlier admission by the Norwegian Defence League that Breivik had once been a member of the organization.
Bergh successfully sued Hansen in March 2013, just a month after the offending article was posted up online.
Alte argued in his defence that he had taken the post offline after only 13 days. However the court noted that he had only done this when the company hosting his blog complained.
Alte plans to appeal the court’s judgement.
Url copied to clipboard!