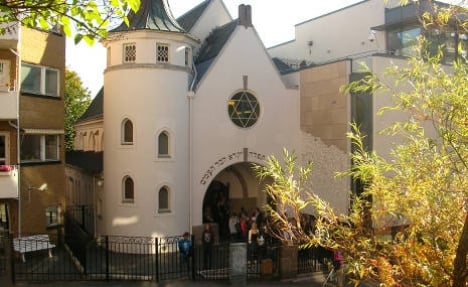 Oslo's synagogue. Photo: Wikimedia Commons
Ervin Kohn, who heads Oslo's Jewish Community, told NTB that a security guard patrolling the road outside the synagogue had alerted the police after seeing a man running out of a building opposite the synagogue leaving the bag behind him.
"We think it's terrific that the police reacted so quickly and took this seriously," Kohn said. "It gives us confidence."
The bag was first reported at 8.15pm, and the bomb squad arrived an hour later by which time police had closed off the surrounding streets and asked residents of nearby buildings to stay away from their buildings.
Fears that Oslo's synagogue could be a target of future terror attacks have increased since Omar Abdel Hamid El-Hussein attacked a bat mitzvah party at a synagogue in Copenhagen, shooting dead Dan Uzan, who was working as a security guard at the event.
After the attack, Norwegian Muslims arranged a 'Ring of Peace', holding hands in front of the synagogue in a symbolic act of solidarity which was reported across the world.