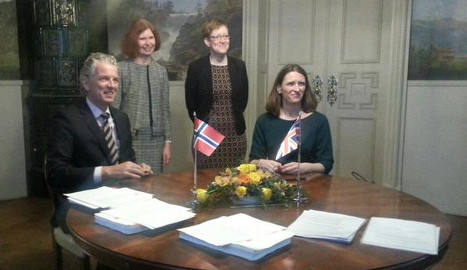 The signing of the deal at the British embassy in Oslo. Photo: British embassy
Statnett and National Grid, the two countries' grid operators, on Thursday signed a deal to construct a €2bn cable link between the two countries' electricity markets.
Tord Lien, Norway’s energy minister, said that the cable would justify further investment in developing hydropower in Norway.
“A cable to England will increase the value of our Norwegian power resources and is important for the government's investment in increased production of renewable energy to succeed,” he told Norway’s NTB newswire.
At 730km, the cable will beat the existing record for the longest submarine cable, set by the 580km link between Norway and the Netherlands.
It will start in Kvilldal, near Stavanger and arrive in the UK at Blyth, just north of Newcastle.
Ed Davey, the UK’s energy minister, said in a statement that he was overjoyed that the long-mooted project was finally going ahead.
“This is a project I have worked on with Statnett and National Grid for two years and I am delighted they’ve now made this massive investment decision,” he said.
“It won’t be all one-way traffic. We are in the process of investing heavily in new low-carbon generation. In the future we would expect that there will be times when our generation exceeds our demand and we are able to export clean power to Norway in return.”
He said that the interconnector would help underpin the UK’s wind power development by providing a huge source of green back up power which would be available “at the flick of a switch”.
Oluf Ulseth, chief executive of Energy Norway, which represents the Norwegian power industry, agreed that linking together the two power markets would yield enormous benefits.
“Britain is in the process of constructing huge amounts of irregular wind power, while Norway has flexible hydropower and a growing power surplus,” he said. “The new cable will enable us to export when there is no wind on the British side, and import when the British have a surplus of inexpensive wind power.”
However he said that it was a shame that the project and a second link to Germany, had been delayed.
“We would rather have had both these cables in place already,” he said.
The project is expected to be finished by 2021.
Url copied to clipboard!