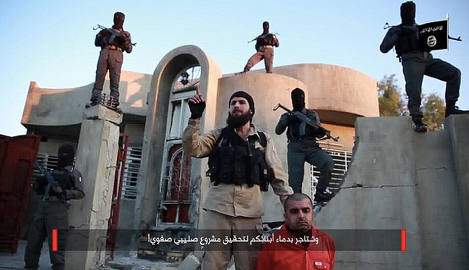 An image from an Islamic State propaganda video released in March.
The Police Immigration Service confirmed to the paper that people connected to terrorist groups such as Islamic State, Al-Shabaab and Boko Haram had all tried to come to Norway to claim asylum.
“It can be very expensive to find out who they are and what they have done,” Hanne Jendal at the Immigration Directorate told the newspaper.
She said that asylum seekers found to have participated in criminal acts would be denied refugee status.
Since 2008, between 90 and 100 people have been denied asylum due to past participation in terrorism, including Iraqis, Eritreans, Palestinian, Afghans, Somalis, Russians, Sri Lankans, Ethiopians, Iranians, Syrians, Yemenis, Equatorial Guineans, Uzbekistanis and Zimbabweans.
These asylum seekers have been sent back to their home country, unless they risk being subjected to inhuman treatment, torture or the death penalty.
Rolf Arne Kurthi from the Police Immigration Service (PU) estimates that as many as 98 percent of those seeking asylum in Norway are genuine refugees.
Url copied to clipboard!