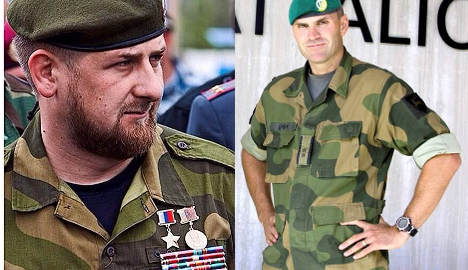 Chechen strongman Ramzan Kadyrov (left), Norwegian military uniform (right). Photo: Twitter/Norwegian Armed Forces
After pictures surfaced of Kadyrov dressed in the Norwegian Army’s unmistakable camouflage pattern, experts in Norwegian uniform have been attempting to trace the outfit.
“It is not surprising that Kadyrov is wearing uniform. But it is strange that he is wearing Norwegian uniform,” Julie Wilhelmsen, a Chechnya expert at the Norwegian Institute of International Affairs, told the Aftenposten newspaper.
Linn Therece Johansen, a spokesperson for the Norwegian Armed Forces, said that Norway tried to ensure that only Norwegian military personnel had access to the country’s uniforms.
“On a general basis, we are concerned that Norwegian uniforms should only be used by personnel from the Norwegian Armed Forces,” she said.
Movladi Baisarov, the former head of the Chechen Presidential Security Service, accused Kadryov of running Chechnya like “a medieval tyrant” shortly before he himself was gunned down by Kadyrov’s police just a few hundred metres from the Kremlin.
The pictures of Kadyrov in Norwegian uniform surfaced in November last year when the 38-year-old ruler tweeted a picture of himself in the uniform.
The Norwegian Armed Forces stopped selling surplus uniforms in 2005, deciding to incinerate them instead to stop them being used by unsuitable people.
Arne Hagtvedt, a retired colonel who has for years been involved in army uniform procurement, said that he did not believe Kadyrov had purchased the uniform from Norway.
“The Armed Forces uses overseas factories to manufacture the material used in Norwegian camouflage uniforms. There has obviously been some material left over. Kadyrov has probably just purchased surplus stock of the material and used it to sew his own uniform.”
Url copied to clipboard!