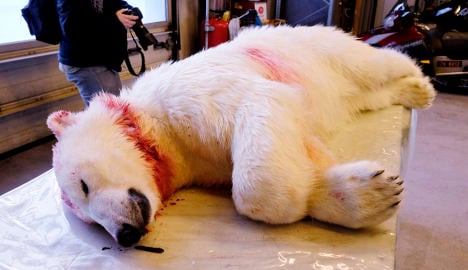 The carcass of the bear after it wsa shot. Photo: Håkan Mosvold Larsen/NTB Scanpix
"We were sleeping in the tent, and when I woke up the polar bear was standing on top of me," Jakub Moravec (37) told NRK from hospital after the attack on Wednesday night. "It went straight to my head. Luckily my colleague shot it."
Zuzanna Hakova, who was part of the same Czech tour party, said that her mother had shot the bear three times using a revolver.
"We woke to shouts of "Bear! Bear!" coming from the second tent," she told NRK. "We had a rifle on the outside of each tent and we also had a revolver in our tent. The ones being attacked had no chance of getting their weapon, so my mother took her revolver and shot the bear three times."
Moravec, one of a group of six campers, is now being treated in Longyearbyen, the islands' capital, for injuries to his face and arm.
The Czech group were travelling deep into the harsh Svalbard landscape to find the perfect place to watch tomorrow's eclipse.
The Svalbard islands, an archipelago in the Arctic, and the Faroe Islands, a Danish autonomy territory in the North Atlantic, are the only two places on land where the eclipse will be fully visible.
The moon is expected to pass between Earth and the sun on Friday, with a total eclipse beginning at 1011 GMT in Svalbard and lasting for three minutes.
It is the only total eclipse this year, and some 1,500 to 2,000 tourists from around the world are expected to descend on Svalbard for the chance to observe it.
Local authorities have warned eclipse chasers of the dangers posed by polar bears. People leaving Svalbard's inhabited areas are required to be accompanied by an armed local guide or carry a rifle.
According to police, the six campers were taking part in a snowmobile and ski tour some 50 kilometres (30 miles) from Longyearbyen, the main town in Svalbard, when the attack occurred.
It was not immediately known whether the tourists were in town for the eclipse.
There have been five fatal polar bear attacks in Svalbard in the past four decades. The most recent one occurred in 2011, involving a 17-year-old British student on a school trip.
Some 3,000 polar bears live in the region, outnumbering the 2,500 inhabitants.