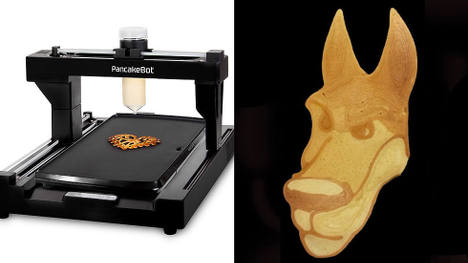 PancakeBot and a dog-shaped pancake. Photo: StoreBound
Essentially a 3-D printer which draws in batter on a hotplate, the device creates scrumptious waffles in any shape you can scan or draw.
Miguel Valenzuela, an American who lives Hokksund, west of Oslo, has raised more than four times his original $50,000 goal after listing the project on Kickstarter earlier this month.
The product has featured on ABC News, Wired, Yahoo News, and Huffington Post among others.
“We have created many different shapes with the robot, but I think my favourite so far is the dog,” Valenzuela told the Norwegian cooking website Godt.no. “It shows how you can create different shades of colour, capturing the expression of the character.
Valenzuela moved to Hokksund in 2010 after meeting his Norwegian wife while studying engineering in California.
According to Valenzuela, the idea came when his daughter Lily asked him what he was reading.
He replied, “I am reading about a guy that made a pancake stamping machine out of Lego.”
Lily then turned to her little sister Maia and said, “Papa’s going to build a Pancake Machine out of Lego!”.
It took Miguel six months before his first Lego machine made its first successful pancake, and the first prototype was revealed at the World Maker Faire in New York.

Valenzuela describes himself as  "a husband, father, inventor and artist" who daylights as a civil engineer. Cu
He told Godt that he had received a lot of help from Kongsberg Vitensenter, a centre for young people interested in science run by his local municipality.
Url copied to clipboard!