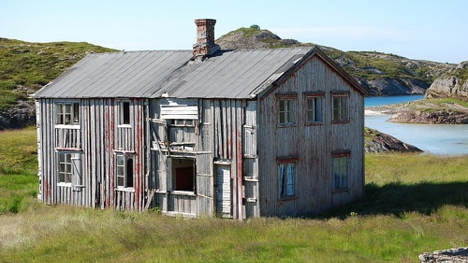 The house on Buøya. Photo: Finn.no
The house, on the island of Buøya on the fringes of the Arctic circle, is being sold with a patch of land, including its own sandy beach.
It has been deserted since the last tenant moved out in the 1970s and is in need of more than a lick of paint.
“Is there anyone out there who has passion and resources to salvage this house?” Kent Karlsen, who owns the property, wrote in his advert on Finn.no, Norway’s version of eBay, which was posted at the end of February.
“I can hardly take anything more for the house. It’s a catastrophe, to say the least,” Karlsen told Norway’s NRK. “Pretty much everything needs doing. But for the right person, this is an exciting project and a unique opportunity.”
He said that since he put up the advert, he had already been contacted by quite a few interested parties, including an engineer from Bergen.
“We’ll see if I can find the right person who is willing to take on so much work. To give away the house, I have to get the right gut feeling,” he said.
Url copied to clipboard!