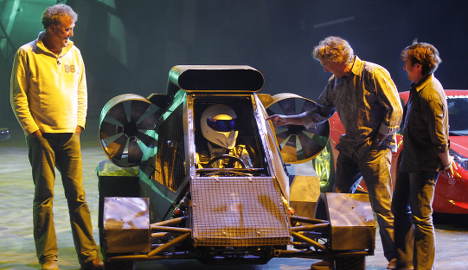 Jeremy Clarkson (right) with co-presenters in a rehearsal for a Top Gear Live event in Oslo in 2011. Photo: Morten Holm / Scanpix
According to the newspaper, “a question mark now looms” over the sold-out event on March 27th and 28th.
Clarkson, one of the BBC’s most highly paid presenters, was  "suspended pending an investigation" on Tuesday after an event co-presenter James May described as “a bit of a dust-up” with a producer.
Peer Osmundsvaag from Atomic Soul, the company putting on the Top Gear Live Stavanger shows has so far been adamant that the events will go ahead.
“Top Gear Live is unaffected by this and we look forward to four shows with all three presenters at the end of the month,” he told Norway’s Dagbladet newspaper shortly after the BBC announced Clarkson’s suspension on Tuesday.
Osmundsvaag had yet to reply to an email from The Local by the time this story was published.
Url copied to clipboard!