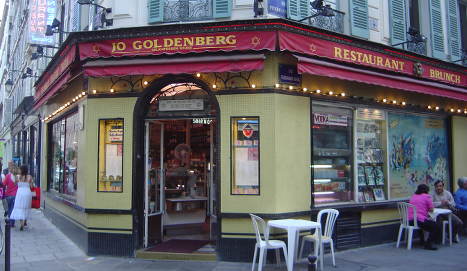 The Jo Goldenberg restaurant, which was hit by a gun and grenade attack in 1982. Photo: David Monniaux
Walid Abdulrahman Abu Zayed, alias "Souhail Othman", who has lived Norway since 1991, was one of three suspects on a French international warrant issued two weeks ago.
But his wife angrily denied the charges against him, and an official with the Norwegian Prosecuting Authority said that as he was now a citizen, he could not be extradited.
"There is no legal basis in Norway for expelling a Norwegian citizen to France or any other country," the official told AFP on condition of anonymity.
He also said Norway was unlikely to arrest the suspect because a 2013 law exempting "serious acts of terrorism" from a 25-year statute of limitations cannot be applied retroactively.
France on February 20 issued international arrest warrants for three men suspected of involvement in the grenade and shooting attack on a Jewish restaurant in Paris that killed six people.
The attack was blamed on the Abu Nidal Organisation, which was seen in the 1970s and 1980s as one of the most violent Palestinian militant groups.
Abu Zayed's wife told AFP the allegation against her husband, who lives in the small town of Skien south of Oslo, was a case of "mistaken identity".
"My husband has never killed anybody. He has never been to France," said the woman, who did not give her full name.
Paris remains on high alert after the jihadist attacks in January against a Jewish supermarket and the Charlie Hebdo magazine that left 17 people dead.
Url copied to clipboard!