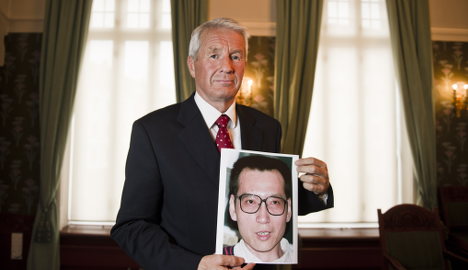 Thorbjørn Jagland poses with a photo of jailed Chinese activist Liu Xiaobo after he as awarded the Nobel Prize in 2010. More than four years later Xiaobo remains in prison. Photo: Aleksander Andersen
Nobel committee chairman Thorbjørn Jagland was moved on Tuesday from his post atop the high-profile panel, spurring speculation of a potential rapprochement between Oslo and Beijing after more than four years of frosty ties.
Jagland, who will remain a committee member, was at the helm of the organisation when it awarded the 2010 peace prize to jailed Chinese activist Liu Xiaobo, a move that enraged Beijing.
China later banned whole salmon imports from Norway, supposedly on safety grounds, and Norwegian citizens have been excluded from a 72-hour transit visa scheme.
Oslo's ambassador — in post since 2007 — has reportedly been unable to return home for fear that if he leaves, his successor will not be granted a visa.
Chinese foreign ministry spokeswoman Hua Chunying said that Beijing's position on the awarding of the prize and China-Norway relations is "subject to no change".
"Our position on developing ties with Norway is clear, which is also I believe very clear to the Norwegian side," she told reporters at a regular briefing, without elaborating.
Hua declined to say whether Jagland's departure had ever been a subject of discussion between Oslo and Beijing.
The Nobel committee is independent of the government, although its members are chosen by the Norwegian parliament.
Oslo's attempts to normalise political ties with the world's second largest economy have proved fruitless as, according to analysts, Beijing wants to set an example to deter other countries.
In September Norwegian media reported that in 2013 then-prime minister Jens Stoltenberg had considered — but ultimately decided against — secretly apologising to Beijing for Liu's Nobel award.
China maintains that it is up to Norway to make a gesture to normalise ties.
Url copied to clipboard!