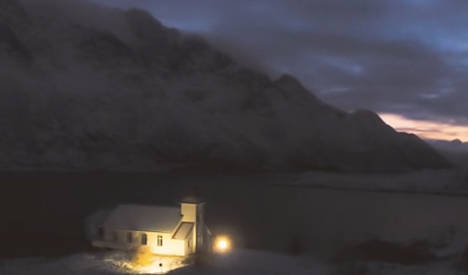 An isolated church in the icy Lofoten winter. Photo: Screen Grab from Vimeo
The film, called One Flew over Norway, has already been played 38,600 times on Vimeo.
Like Byrko’s earlier drone films from Iceland, the Volga River, and Utah’s Great Salt Lake, it shot with a GoPro 3 Camera carried by a multicopter.
The footage starts in the village of Å in Moskenes, before taking in the sights of Reine, Hamnøy, Kubbholmleia, Bøvatnet lake, Gimsøystraumen Bridge, Steinøya near the Henningsvær, Svolvær, Sildpollnes Church, Kinnarvika, Holdøya, Storvatnet lake, and Duorggajávri lake.

Lofoten. One Flew over Norway from Igor Byrko on Vimeo.