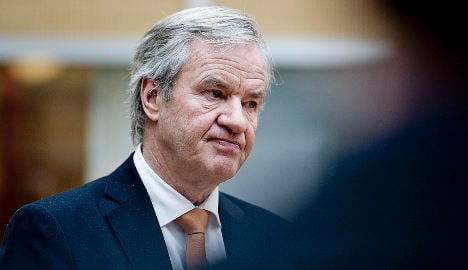 Norwegian chief executive Bjørn Kjos at a press conference at Oslo's Fornebu airport on Saturday. Photo: Jon Olav Nesvold / NTB scanpix
The company’s chief executive Bjørn Kjos said that running flights for its customers was its overriding priority, and denied that the company was resorting to strikebreaking tactics.
“We live by passengers. They are our main focus. We will do what we can to take care of them,” he said.
Norway’s Parat union formally announced the strike in the early hours of Saturday morning, after talks with the airline broke up after the midnight deadline. It announced that 70 pilots would strike this weekend, with the number possibly rising as high as 650 from Wednesday if a deal could not be reached.
Hans-Erik Skjæggerud, leader of the Parat Union told The Local that by bringing in pilots from elsewhere, the airline was clearly strikebreaking.
“This is a very serious situation because it undermines the Norwegian Labour model,” he said. “There’s no labour rules or law that says that what Bjørn Kjos is doing is illegal, it’s just that throughout Norwegian Labour history, this has been considered unacceptable and unethical.”
He said that Norwegian’s aggressive tactics would make negotiations harder in the coming week.
“This is clearly an obstruction to reduce the effect of the industrial action, and it’s a serious situation, because it will only make the conflict deeper.”
Pilots in the company’s Norwegian subsidiary have been pushing for more that three months to sign a collective labour agreement with the parent company, rather than simply with its Norwegian subsidiary. They also want uniform terms across the Nordic region.
However, the airline argues that Norwegian needs to cut costs and restructure employment terms in order to remain a  "sustainable company and secure jobs in the future”.
Norwegian earlier this month posted an unexpectedly deep 1.6 billion kroner ($210m) loss for 2014, something it argued underlined the need to change staff terms.
Url copied to clipboard!