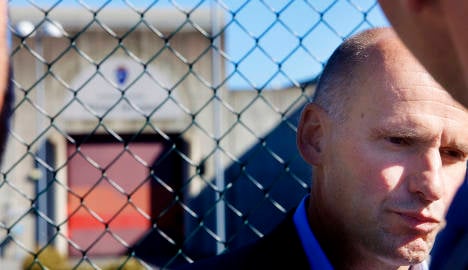 Geir Lippestad outside Norway's Skien prison, where Anders Behring Breivik is currently being held. Photo: Peder Gjersøe / NTB Scanpix
Lippestad said that as the case was being prepared, he had judged that the expectations the far-right militant had of what the firm could do for him were becoming increasingly “unrealistic”.
“We have looked at the possibility of bringing a case concerning prison conditions, but we disagree on what makes sense,” Lippestad told Norway’s VG newspaper. “There has been a discrepancy between the expectations Breivik has and what it is prudent for us to offer him.”
Lippestad will be replaced by Øystein Storrvik, the lawyer famous for defending David Toska, the mastermind of Norway’s biggest heist to date, the theft of 57.4m kroner from the Norwegian security company NOKAS in 2004.
Breivik was in 2012 given a 21-year sentence for mass murder and terrorism, after the Oslo court ruled that he was sane.
The killer had already decided that Lippestad would represent him even before he carried out his brutal twin terror attacks in 2011, apparently because he had admired the way Lippestad had defended one of Norway’s most notorious racist murderers a decade earlier.
Lippestad and his team won plaudits both in Norway and internationally for the professional way they defended the man responsible for Norway’s worst ever terrorist atrocity, taking him through his trial in 2012 and then continuing to protect his rights in prison.
However the law firm said that it could now no longer provide what Breivik was demanding, after more than two years of working for Breivik for free.
“He had unrealistic expectations of the amount of work that we can offer,” Odd Grøn, part of Lippestad’s legal team, told The Local. “The work that we have done for him over the last years has not been paid.”
“It’s not just that case, but everything, the total amount of work that he expected to be done.”
Storrvik said he believed Breivik had a real need for assistance.
“My experience is that convicted people undergoing long, preventative detentions are perhaps the group of clients who have the most need of legal assistance,” he told VG.