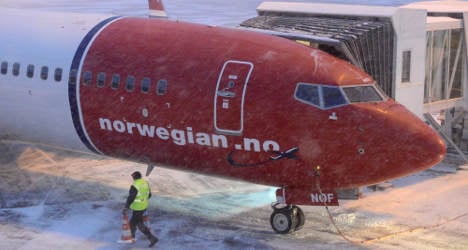 The cabin crew that walked off will be grounded while the incident is being investigated. Photo: Johan Nilsson / TT

The incident occurred on January 26, when the pilot started fighting with the cabin crew over whether it was safe to carry out the transatlantic flight because of the approaching snow storm. Four of the nine cabin crew staff got so angry they walked off the aircraft, but the pilot decided to go ahead with the 196-passenger flight anyway.

According to the Norwegian aviation authorities, which is investigating the incident, it is against the rules to fly with a reduced number of aircrew staff.

In an email to Norwegian daily Dagbladet, Tomas Hesthammer, the head of Norwegian’s flight operations, said the incident is being looked into, but insisted that five cabin crew on 196 passengers is in line with the minimum conditions.

Norwegian’s communications chief, Charlotte Holmbergh Jacobsson, also underscored that the airport remained open for take-offs and landings and that other airlines were flying.

“The pilot has the main responsibility for security on board and he is the one who makes the call whether it’s safe to fly or not. That’s not a task for the cabin crew,” she told Swedish news agency TT.

The cabin crew staff that got off the plane will be grounded until the investigation has been completed, Holmbergh Jacobsson said.

Since Norwegian launched its long-haul flights, the airline has been hard hit by delays and has been forced to pay large amounts of money in damages.