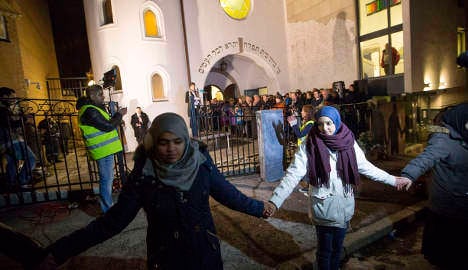 As the small mainly elderly Jewish congregation filed out of the synagogue after Shabbat prayers, a group of young Muslims, many of them teenage girls wearing headscarves, formed a symbolic ring outside the building to roaring applause from a crowd of more than 1,000 people.

"This shows that there are many more peacemakers than war-makers," 37-year-old Zeeshan Abdullah, one of the organisers told the crowd.

"There is still hope for humanity, for peace and love across religious differences and background," he added, before a traditional Shabbat ceremony was held in the open air with many demonstrators adding their voices to the Hebrew chants.

Norway's chief rabbi appeared visibly moved when he said it was the first time the ceremony had taken place outdoors with so many people.

"It is unique that Muslims stand to this degree against anti-Semitism and that fills us with hope… particularly as it's a grassroots movement of young Muslims," said Norway's Jewish community leader Ervin Kohn, adding that the rest of the world should "look to Norway".

"Working against fear alone is difficult and it is good that we are so many here together today."

There was a heavy police presence at the event and sharp shooters placed on surrounding buildings but no incidents were reported.

"It has been calm as we expected. We had no reason to expect any trouble but we were prepared," said police superintendent Steiner Hausvik, adding that about 1,300 attended the vigil.

Several Muslim speakers said that Islam was a religion of peace and that "it's true face" had nothing to do with terrorism — despite what they said was unfair reporting in certain Nordic media which portrayed Muslims "as a problem".

The initiative by Norway's Muslim youth to link arms with Norwegian Jews in a circle around Oslo's synagogue was an effort to denounce recent violence by jihadists striking Jewish communities in France and Denmark.

"We want to show our support to the Jews after what happened in Copenhagen," Hibaq Farah, a young Muslim student of Somali origin told AFP. The impetus for the vigil came from some young people in Norway's Muslim community, which represents roughly three percent of the nation's 5.3 million population.  They wanted to demonstrate support for the country's estimated 1,300 Jews, following one of the attacks in Copenhagen last weekend that killed a 37-year-old volunteer security guard outside the city's synagogue.

The gunman, named by police as 22-year-old Omar El-Hussein — a Dane of Palestinian origin — was reportedly radicalised by Islamists during a two-year jail term.

"This is the best possible response we can give to the polarisation we've seen in debates after the attacks in France and Denmark," he said, referring also to the killings last month targeting Jews at a kosher supermarket in Paris.

A Norwegian Islamist was convicted in 2008 for a shooting attack on Oslo's synagogue two years earlier which damaged the building but claimed no casualties. In 2011, extreme-right mass-murderer Anders Behring Breivik shocked Norway by going on a killing spree directed at proponents of multiculturalism that left 77 people dead.