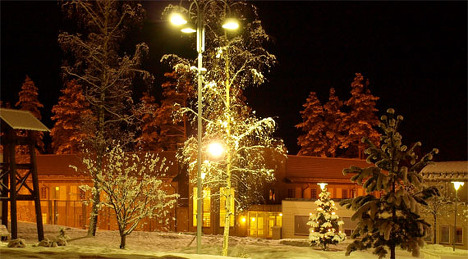 A winter scene at Ringerike Prison: Photo: Ringerike Prison
Ringerike prison near Oslo, which long operated Norway’s only high-risk wing, said it planned to run seminars and philosophy groups to help young Muslims explore their faith.
“We are now about to enter into a partnership with an imam who will conduct seminars for Muslims,” Prison governor Håkon Melvold told VG newspaper. “In addition, we will create philosophy groups with participation from various faiths.”
Danish police suspect that Omar Abdel Hamid El-Hussein, the man who shot dead a Danish filmmaker and a Jewish security guard on Saturday afternoon and Sunday morning, became radicalised while awaiting trial in remand prison some time in 2014.
But the anti-immigration Danish People’s Party vetoed any involvement by imams in the country’s anti-radicalisation strategy agreed on by parliament last month, arguing that Muslim religious leaders were “part of the problem”.
Melvold argued that “presence, participation, and close monitoring” was the best way for Norwegian prisons to uncover sudden radicalisation among inmates.
Terje Auli, prison chaplain at Oslo prison, said prisons should help Muslims to practice their religion.
“It is obvious that we counteract extremism when we facilitate the practice of religion in prison,” he said.
Franck Orban, an associate professor at Østfold University College, who researched radicalisation in prison while at the Prison Service’s staff college, said that there were several examples of Norwegian Muslim inmates being radicalised in prison.
He recommended a somewhat tougher approach from that planned at  Ringerike.
“Isolation from other inmates, and rotation between several institutions works to prevent radicalisation among inmates,” he said.