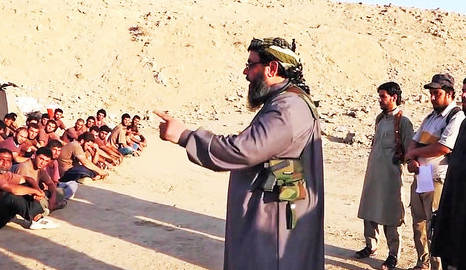 A class taking place at an ISIS bootcamp in Syria, such as the woman is supposed to have attended. Photo: YouTube screengrab/Karl-Ludwig Poggemann/Flickr
According to Sweden’s Göteborgs Tidning newspaper, Norway’s Police Security Service (PST) has put out an "orange notice"  warning that the woman, who has they believe has received weapons training in Syria, is now back in Europe.
According to the newspaper, the agency had received a tip-off from friends of the woman, who said that she may have had weapons training in Syria, and could be planning a suicide attack.
The woman has not been seen by her relatives for more than two months and there are fears that she may have crossed the border into Sweden. Swedish police and security services have been asked to keep an eye out for the potential terror suspect and to pass on any relevant information to authorities in Norway.
“She has travelled all over the place,” a person close to the woman told the Swedish newspaper. “I'm worried about her. I think about her all the time and I sleep very badly.”
Expressen reports that the woman recently married and told her closest friend that she was preparing to travel to Turkey. Some of her friends were apparently worried that she was planning to spend time in Syria.
Url copied to clipboard!