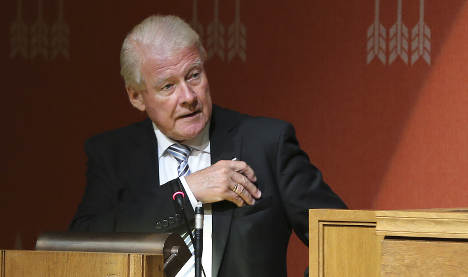 Carl Hagen in October 2014. Photo: Terje Pedersen/NTB Scanpix
Carl Hagen, who led the populist anti-immigration party for nearly three decades and still represents the party on Oslo city council, posted his message on Facebook after joining a 30,000 strong crowd commemorating the two men killed in Copenhagen’s twin terror attacks, and demonstrating support for§ Danish values of democracy and diversity.
“Great ceremony from Denmark after the Islamist murders,” he wrote. “Where were you all when [Anti-Islamist leader] Max Hermansen in Oslo had to report sick because he was threatened by Muslim students…?”
“Must Max Hermansen be killed before the population wakes up to creeping Islamization and the increasing compliance with pressure from various Islamic pressure groups in schools, colleges, universities and jobs?”

Post by Carl I. Hagen.
The Progress Party sidelined its most vocal anti-Islamist and anti-immigrant voices after becoming the junior partner in Norway’s right-wing coalition government in 2013.
But Hagen was not alone in the party in his response to the Copenhagen attacks.
Oslo MP Mazyar Keshvari on Monday called for a complete cessation of immigration to the city, arguing that integration could not succeed with immigrant numbers rising at the present rate.
“How on earth can minorities integrate into society when minorities constitute the majority in an ever greater number of  schools?” Keshwari told Norway’s TV2 channel, after a programme aired on Monday night drew attention to the high proportion of immigrant children in many Oslo schools.
Max Hermansen, who leads the Norwegian wing of the German anti-Islamist group Pegida, has complained that he can no longer get work as a teacher now he has become a public figure campaigning against Islamism.