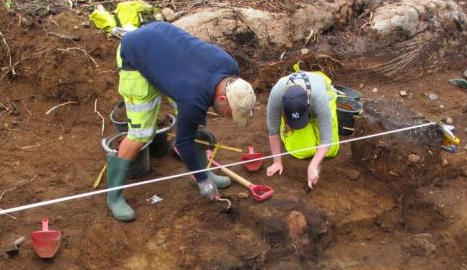 Archeologists dig at Stokke following the discovery of a Stone Age grave containing a skeleton. Photo: Museum of Cultural History in Oslo
“Brunstad man”, whose remains were found in Stokke, south of Oslo, is now believed to be from the Mesolithic period, which spans from 10,000BC-4000BC)
“The discovery is sensational in Norwegian, and indeed even in a north European context,” Almut Schülke, an archaeologist working for the Museum of Cultural History at the University of Oslo, told Aftenposten journalists when they visited the laboratory where the find is being analysed on Monday. “It is very seldom that we find bones from the stone age.”
The skeleton is in an extremely fragile condition, meaning researchers are painstakingly examining it tiny fragment by tiny fragment, documenting the location of everything as accurately as possible and feeding it into a 3-D computer model of the find.
The archaeologists hope to learn the age of the man, his diet and the extent to which the people who found their way so far north had contact with other settlements around the Skagerrak and the Baltic Sea.
The skeleton was found lying in the fetal position, a typical stone-age burial position, in a pit which had been bricked in on the inside.
The researchers had to divide the skeleton and the surrounding soil into eight parts to remove it from the earth and bring it back to the archeological laboratory in Oslo.
Schülke told the newspaper she hoped to find further evidence of human activity at the same site.
“We do not know if Brunstad was a fixed settlement or whether it  was a place people went to pick up special resources, such as different types of stone,” she told the newspaper. “We do not know of other major tombs nearby, but it was not uncommon to add a single grave so close to a settlement, as they have done here.”