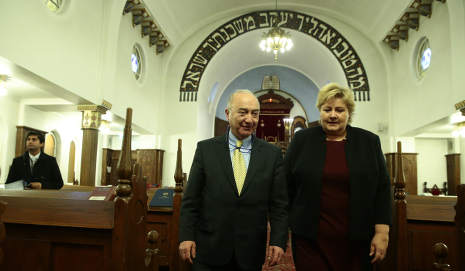 Norwegian Prime Minister Erna Solberg in Oslo synagogue with Ervin Kohn, head of the city's Jewish community. Photo: NTB/Scanpix
“We are committed to fighting anti-Semitism and we are committed to ensuring a society that is inclusive for all,” Solberg told journalists after meeting Ervin Kohn, head of Oslo’s Jewish community.
The visit was made on the prime minister’s own initiative after Sunday morning’s attack on a bat mitzvah celebration at a Copenhagen synagogue left the man guarding the synagogue dead.
Solberg warned that in an open society where privacy is respected, citizens are “never 100 percent secure”.
“We are concerned that this kind of violence could happen in different ways,” she told Aftenposten. “We have seen cases in Canada, Australia, Belgium — several episodes where either Jews, police, military or political institutions have been targeted. It shows that the threat is increasing.”
She estimated that “around ten percent” of Norway’s population had anti-Semitic attitudes.
Kohn said that Oslo’s synagogue was clearly a target, and asked for the road that runs outside it to be closed off to cars to make it harder to attack.
“We cannot be naive. Jews are an explicit goal, therefore we should not be surprised if something similar to what happened in Copenhagen happens in Oslo,” he said.
Police cars have been patrolling outside Oslo’s synagogue since police were put on high alert following the attacks on Saturday night.
Justice Minister Anders Anundsen has also required police to carry weapons, in response to the heightened risk.
“In the threat situation we now find ourselves in, I think it's obvious that we should have the level of armament we have,” he said. “They should have the opportunity to defend themselves, and be capable of fast deployment if something happens.”
Anundsen said that the Copenhagen attacks underlined how important it is for Norway’s security services to be vigilant and well-prepared.
“It shows that terror is in our backyard, and it imposes some extremely serious demands on us as authorities,” he told VG.
Armed police were deployed to Oslo’s Literaturehuset cultural centre on Saturday, where a talk was held on France’s Charlie Hebdo magazine and freedom of expression only hours after the attack on a similar debate at Copenhagen’s Krudttønden left a local film director dead.
Andreas Wiese, Literaturehuset’s manager, told VG that there had never been any discussion of cancelling in the wake of the Copenhagen attack.
“Freedom of expression must be respected in Norway and we will continue to hold events,” he told the newspaper.
However in an interview with VG on Saturday, Solberg warned Norwegians not to let the attacks in Copenhagen affect Norway’s open society.
“We should not let our fear lead to major changes in our daily lives,” she told the country’s VG newspaper. “Terrorists want to spread fear and for that reason, we should not give in to them.”