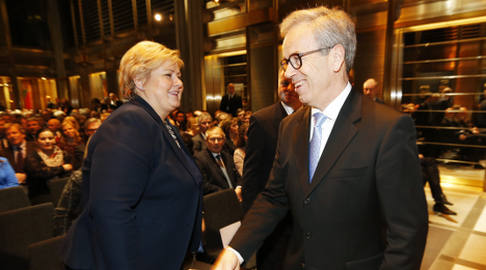 Norges Bank governor arrives for his annual Norges Bank address on Thursday night. Photo: Lise Åserud/NTB scanpix
In his annual address, Norges Bank governor Øystein Olsen called on the government to cut the level of oil revenue spent as a share of GDP in order to maintain the fund for future generations.
“It has always been clear that this will happen at some point in the future,” Olsen said. “What is new is that this may be the case here and now. At today's oil price, the GPFG may have reached its peak.”
Norway’s careful management of its oil windfall has allowed the fund to grow to $868bn, well ahead of the sovereign wealth funds  managed by world’s biggest oil producers such as Saudi Arabia, Abu Dhabi, and Kuwait.
However, although the fund could still grow in absolute size, perhaps even topping one trillion in 2020 as projected, it could now start to shrink as a share of Norway's GDP.
Norway’s policy for the oil fund has been to spend only the return on its investments — estimated at around four percent — leaving the underlying capital intact. Indeed, over the recent period of high oil revenues, the government has spent closer to three percent.
However, Olsen warned that as the fund has grown, achieving even the relatively low four percent return is becoming difficult.
“So far, the GPFG has earned an annual real return of 3.8 percent,” he said. “We must be prepared for the possibility that it will be lower, perhaps below 3 percent.
Meanwhile, he warned, at present oil prices, the fund could stop receiving new funds from oil revenues.
“At today's oil price, transfers to the GPFG will quickly fall towards zero, soon leading to a situation where its current income is limited to interest and dividend income,” he said.
“Next year, it may be necessary to spend some of the return to cover the non-oil budget deficit.”
In conclusion, Olsen called on the government to cut the share of the fund it is spending, effectively scrapping the four percent rule.
“The fiscal rule has functioned as a long-term guideline for fiscal policy for nearly 15 years. It has served its purpose,” he said. “The time has now come to show restraint. A sensible risk adjustment is now to refrain from increasing petroleum revenue spending further from today's level. The era of rising petroleum revenue spending may be behind us.”
The speech puts Norwegian Finance Minister Siv Jensen, who in opposition campaigned for higher spending of oil revenues, in a difficult situation.
On Thursday Jensen said she believed Olsen’s warning referred to the long-term, claiming it would not alter the government's spending plans over the next few years.
“We're going to use a good, solid amount of oil money in the coming years,” she said.
However Bjørn-Roger Wilhelmsen, chief economist at Nordkinn Asset Management, said the speech could be seen as a nudge to Jensen to trim spending of oil revenues.
"He is saying indirectly to Jensen that if you hold back, we will reduce interest rates and weaken the krone," Wilhelmsen told Norway's DN newspaper.