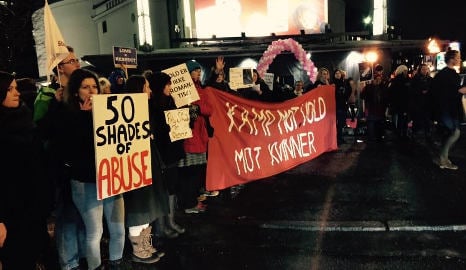 A still from the film Fifty Shades of Grey. Photo: Film still
The women’s group Ottar, which is leading the protest, argued it was bad taste to time the film’s opening night to coincide with Valentine’s Day, as the plot fundamentally revolves around women submitting to violent, controlling men.
“The film is not romantic, but instead romanticises violence and submission,” Ottar member Sara Mauland argued in an essay published this week in Norway’s Aftenposten newspaper, which attacked the film as “a drama about what happens when a young, inexperienced woman meets a power-hungry and manipulative psychopath.”
Ottar is joined by the group ‘Stopp Pornokulturen’, the radical feminist group Kvinnefronten, the Norwegian Association for Women’s Rights, and the Oslo Crisis Centre, a group which helps women facing violence.
“The message is that true love can only manifest itself when women submit themselves to men,” Mauland continued. “We believe that true love should be able to manifest itself among equal partners.”
Ottar’s protest may be unnecessary as the film has been panned by Norwegian reviewers, with VG newspaper calling it “an advanced shitty film”.