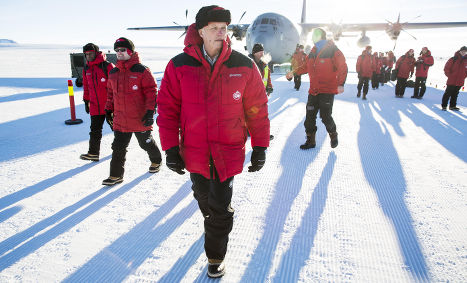 Norway's King Harald just after exiting his plane at Norway's Troll landing strip in Antarctica. Photo: Tore Meek/NTB scanpix
King Harald stepped off 'Nanna', the Hercules plane Norway uses to service its Troll Antarctic research station, on Tuesday evening, following a nine hour flight south from Cape Town.
He plans to spend three days learning about Norway's ice and climate research on the inhospitable continent, in the company of climate minister Tine Sundtoft and justice minister Anders Anundsen.
Norwegian aviation pioneer Viggo Widerøe named a portion of Antarctica’s coast in honour of the then newborn Prince Harald back in 1937, during a surveying expedition led by the Norwegian whaling magnate Lars Christensen. Two years later, Norway annexed a 2.7-million-square-kilometre slice of Antarctica, naming it Queen Maud Land.
“This is the first time ever that a king has visited Antarctica,” Jan Gunnar Winther from the Norwegian Polar Institute told NRK ahead of the visit. “This is historic for us.”
“Prince Harald’s coast is an example of a region which bears the name of the present king. It’s high time he came to see it himself,” Winther continued.
Harald touched down on an ice runway at Norway’s Troll Research station at 18:30 Norwegian time, and he will stay in Antarctica until Thursday evening.
His trip is timed to commemorate the tenth anniversary of Troll’s conversion to a research station which can stay open even in the bitter Antarctic Winter in 2005.
Norway’s Queen Sonja flew down on February 11th 2005 to open both the Troll Airfield and the research station.
The Norwegian Polar Institute in 2013 named a huge swathe of Nordaustlandet, the second largest island in the Arctic Svalbard archipelago, Harald V Land, to thank the king for his support for Norway’s polar research.