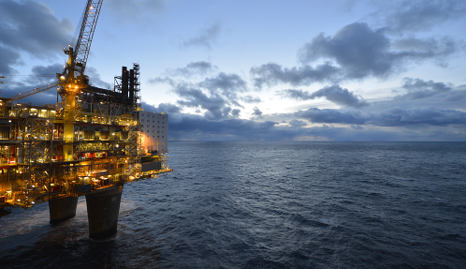 Statoil's Oseberg A platform. Photo: Harald Pettersen/Statoil
Eldar Sætre, who was confirmed as president and chief executive only three days before the announcement, said he believed that the company was well-placed to withstand the tough new conditions.
“Our financial position is robust, and we maintain a stable dividend. Through our significant flexibility in our investment programme, we are well prepared for continuous market weakness and uncertainty,” he said in a press release.
The company unveiled an unexpected loss of 8.9 billion kroner ($1.19bn) for the last three months of 2014, down from 14.8bn kroner in the same period in 2013, a performance Sætre put down to tumbling oil prices.
“Statoil’s quarterly earnings were affected by the sharp drop in oil prices. Our net income was also impacted by specific accounting charges.”
The company said it planned to increase its annual cost-cutting programme by 30 percent from $1.3bn a year starting in 2016 to $1.7bn a year, to make it more resilient in the face of sustained low oil prices.
Sætre, who had served as acting president and CEO since the company’s long-standing chief Helge Lund was poached by BG Group in October 2014, was confirmed in the post on Tuesday.