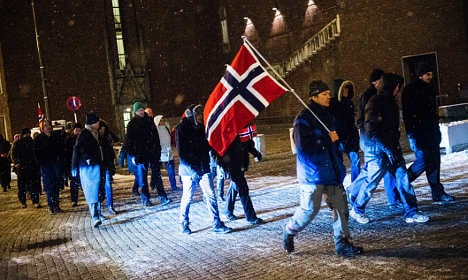 Pegida organizer Max Hermansen had to fight to make himself heard as he addressed supporters outside City Hall.

Some 200 counter-demonstrators lined up nearbycarrying anti-Islamophobia banners and shouting: “No support for Breivik’s prayers” and “No racists on our streets”.

“I’m here to show that nobody can be judged on the basis of their skin colour or religion,” said Linda, 23, who did not want to give her surname.

Demonstrators from the Norwegian Centre against Racism and far-left groups Blitz and Rødt marched from Youngstorget to the Parliament, while Nye SOS Rasisme’s followers walked from the National Theatre to City Hall.

Pegida’s Hermansen spoke of death threats made by Islamists against organizers in the movement’s home city Dresden.

“It’s clear that we’re not getting the freedom of speech we desire. In Oslo we were prevented from walking a four-kilometre circuit and instead had to walk around City Hall three times.”

Hermansen had hoped to gather 250-400 supporters for the march.

A large police presence was in place at City Hall to keep the demonstrations apart.