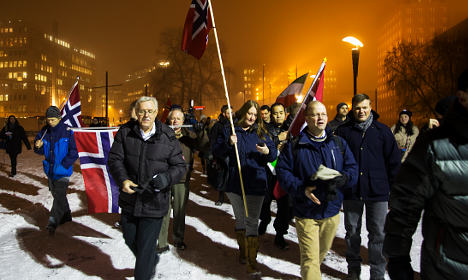 Officials in Dresden ordered the cancellation of the weekly march by the so-called Patriotic Europeans Against the Islamization of the West (Pegida) after Isis jihadists threatened to kill its organizers.

“It’s tragic that we lose some of our freedom of expression because someone doesn’t like what we say.”

Anti-Pegida protesters are also planning to take ot the streets on Monday evening.

"We had a good dialogue with them last time and we hope it will be as pewaceful this time," said police spokesman Tor Grøttum.

"But we are prepared if anything happens."

The 54-year-old Hermansen said he had been in contact with potential Pegida organizers in other Norwegian towns and cities.

“There are discussions about starting marches in Bergen, Trondheim, Stavanger, Kristiansand, Tønsberg and Lillehammer. These are very enthusiastic people who want to do the same in their own towns.”

“We need to start marching to show anyone who's sitting on the fence that it's serious now. We can no longer just sit and watch the big elephant in the room.”

SEE ALSO: The rise and spread of Pegida – The Local Germany