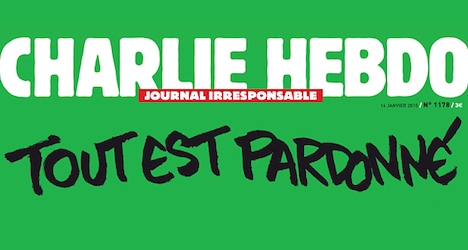 The masthead of the latest edition of Charlie Hebdo

Mehtab Afsar, head of the Islamic Council of Norway, said “They should take into account that a lot of people feel bullied, harassed and mocked. But it is an editorial decision whether or not to publish this kind of drawing,” Afsar told Dagbladet newspaper.

The front page was topped with the words ‘Tout est pardonné’ or ‘All is forgiven’.

Afsar added that he didn’t think Muslims in general want to limit freedom of expression, but said that freedom came with responsibility.

“Muslims can also, in the name of freedom of expression, express their view that they don’t approve of the publication of caricatures of the Prophet. Because isn’t that what freedom of speech is all about?”

Norwegian Christian leaders also expressed reservations about the Charlie Hebdo cover, and particularly the decision by Norwegian media to reproduce it.

“I don’t think it’s a very good idea that a large number of newspapers do this,” said Berit Hagen Agøy, secretary general of the Norwegian Ecumenical Council to NTB, while adding that she understood and respected Charlie Hebdo’s choice to print new Muhammad cartoons after the terror attack against the magazine’s offices. But she said she questioned the choice of Norwegian papers to reproduce it.

One million copies of the new edition of Charlie Hebdo went on sale on Wednesday in France, selling out almost immediately.