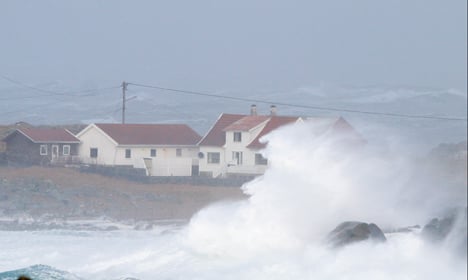 Photo: Jan Kåre Ness/NTB Scanpix
A regional storm left a Fjord Lines ferry carrying 150 passengers and 75 crew members travelling from northern Denmark stranded on the waters outside of Norway for more than 24 hours.
The ferry departed northern Jutland on Friday evening and was supposed to arrive in Bergen at 1pm on Saturday. But damage to the Bergen harbour meant that the ferry could not dock there. It instead changed course for Stavanger, but had to give up those plans due to the raging storm. The ferry was forced to sail back and forth in the fjords overnight between Saturday and Sunday, where conditions were calmer than on the open sea.
Fjordline’s Danish director, Gert Balling, apologised to customers.
“I can understand that people are frustrated about being a day delayed. The forecasts were changed numerous times over the past two days so we made our decision and expected that we could make it to Stavanger. But we couldn’t. The storm changed and arrived an hour earlier,” he told Denmark's TV2 News.
For more on the storm, visit The Local Denmark.