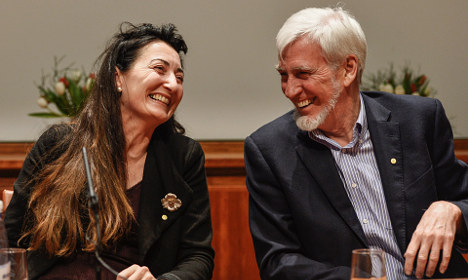 "One of the most influential economists of our time", according to the Nobel Economics Award's committee, French Professor Jean Tirole receives the 2014 Economics Award for his analysis of market power and regulation.

While the economist has been making important research contributions to economics since the mid 1980s in a number of key areas, this award is a more specific response to his work shedding light on industries dominated by large, powerful firms, and monopolies. According to Tirole, such markets can lessen productivity.

Also hailing from France, Patrick Modiano is the author of over 30 novels. A household name in his native country, he is recognized for his large array of work spanning novel writing, films, and even children's books. His works, first published when he was just 22, have been translated into over 30 languages.

Most of Modiano's books are short, less than 150 pages long. The author, who turns 70 next year, is no stranger to awards but this year receives the prestigious Nobel Literature Prize for the first time for his work on identity, memory, and loss. He beat 210 nominees to the top spot, including the likes of the US singer Bob Dylan, Syrian poet Adonis, famed Canadian novelist Margaret Atwood, and controversial British novelist Salman Rushdie.

These scientists receive this year's Nobel Prize in Chemistry for their progress in understanding molecules through their work with microscopes. They have paved the way for scientists to better track and understand molecules, which in turn is expected to provide better understanding on how diseases develop.

Betzig and Moerner are both from the US while Hell is from Romania, and is a Director at the German Cancer Research organization. The three scientists join the likes of previous Nobel laureate Marie Curie, "father of nuclear physics", Ernest Rutherford, and American chemist Linus Pauling in receiving this award.

These scientists' groundbreaking invention of the blue LED is expected to improve lives for over 1.5 billion people across the world. The USA and Japan-based physicists' creation marks a significant development in the area of lighting technology and is being deemed by experts to be the way of the future. They join the likes of Albert Einstein, no less, in receiving the prestigious Prize.

This team of scientists gets major points for its studies on our 'inner GPS' – understanding how the human brain helps people find their way around. A timely discovery, in an age where the use of GPS technology has certainly been taking over that very instinct.

Beyond more profoundly examining the human 'sense of orientation', the scientists have helped deepen understanding of other cognitive processes, such as memory, thinking and planning. Indeed, this dream-team's ground-breaking findings are expected to further our knowledge of the mind and have a significant impact in the field of psychology, such as potentially explaining why Alzheimer's patients cannot recognize their surroundings.

O'Keefe, a dual US-UK citizen, was born in New York and completed his studied at McGill University in Canada, while his Norwegian co-laureates (a married couple) studied together in Oslo, University of Edinburgh, and the University College London. The Mosers are the fifth married couple to be awarded a Nobel Prize and May-Britt is the 11th woman to receive the 100 year old Nobel Prize in Medicine.

At just 17, Yousafzai is the youngest ever Nobel laureate. And it is certainly a well deserved win for the young advocate for children's rights, who rose to fame for her relentless campaigning for girls' education in Pakistan – and was shot in the process by Taliban gunmen, two years ago.

Now living in the UK, she is joined by 60-year-old Satyarthi from India, also a children's rights activist, who is reported to have freed over 80,000 children from servitude. Together, the Hindu Indian and Muslim Pakistani are being recognized for their sacrifices and struggles against the abuse of children and youth around the world, as well as for their efforts in furthering children's rights to education.

Unlike the previous five award categories, the Peace Prize is awarded annually in Oslo.