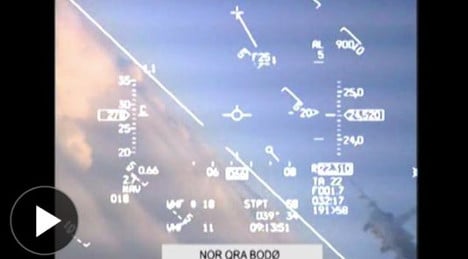 Still of the shocking footage where a Russian jet narrowly avoids colliding with a Nato plane.

A Norwegian warplane had a "near miss" with a Russian fighter jet north of Norway, the Nordic nation's military said Tuesday after showing video of the incident, which backed a complaint made to Moscow.

"The Russian pilot's behaviour was not quite normal," Norwegian armed forces spokesman Brynjar Stordal told AFP, commenting on a 26-second film clip
released Sunday which appeared to show a fighter jet suddenly cut in front of a Norwegian F-16.

The incident added to climbing tensions between Russia and NATO member states in recent months, underlined by claims of other recent near misses with
Russian military jets.

In the airforce clip supplied by Norway's military, the Norwegian pilot shouts "What the hell!" before veering away sharply from the other jet which Norway identified as a Russian MiG-31 that came to within 20 metres (65 feet) of the F-16.

"We don't know if it was a miscalculation or if he deliberately put himself in the path of our F-16," said Stordal, adding that Norway's armed forces had informed Russia that the incident was "undesirable".

The close encounter occurred in international airspace "north of Norway" but the armed forces did not say when.

Unlike neighbouring non-aligned Sweden, Norway — a NATO member — has not reported any airspace incursions by Russia in recent years and gauges the
level of Russian airforce activity in the area as "pretty normal or a little more" than usual.

So far this year Norway has scrambled its airforce 43 times to identify 69 Russian planes, compared to 41 incidents involving 58 planes in 2013.

NATO Secretary General Jens Stoltenberg said last month that the alliance had reported 400 intercepts of Russian military flights so far this year — a 50 percent increase compared to 2013 — and complained that Russian jets flying without sharing their flight plans posed a danger to commercial air traffic.