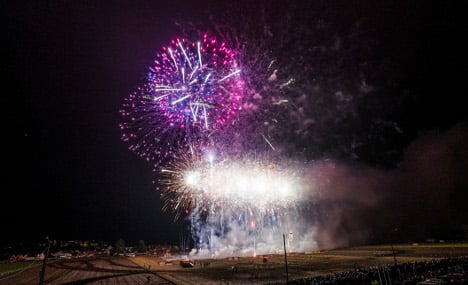 The town of just over 10,000 inhabitants officially beat the record set last year by the city of Dubai, to claim the title of the biggest and best fireworks display ever.

Officials from Guinness World Record were on hand on Saturday evening to approve the fireworks display as a new world record.

The Norwegian organizers set off 540,382 fireworks in a spectacular 20-minute show, reported Fædrelandsvennen.

The event was organized by local business Svea Fyrverkerier in cooperation with the local hardware store Sør-Tre, who collaborated to synchronize the spectacle.

The firework show went off in joint celebration of the switching on of the Christmas lights in Søgne, and an estimated 15,000 people enjoyed both events.

Anders Sture, general manager of Svea Fyrverkerier, said before the event: "The sky will be 'painted' in red, white and blue in order to create a gigantic Norwegian flag. This is our tribute to the 200th anniversary of the Norwegian constitution.”
The world record for the number of fireworks set off was set in Dubai during last year's New Year's celebration. 479,651 fireworks were set off in six minutes.
Fireworks and pyrotechnics equipment came from Norway, Sweden and Finland for the record attempt.