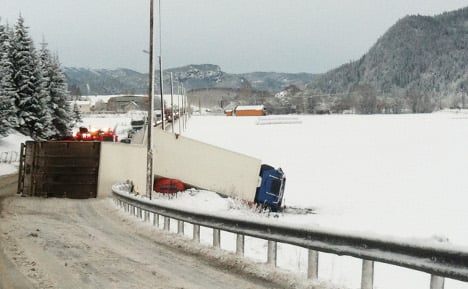 Transport Minister, Ketil Solvik-Olsen, wants to send foreign drivers who drive heavy goods vehicles on "slippery driving" courses before allowing them to drive their trucks in Norway. This is to counteract the many drivers who take to the Norwegian roads unprepared in winter. Common 'crimes' include having no tyre chains or winter tyres.

The Minister said: “Foreign drivers are over-represented in the number of accidents while driving heavy goods vehicles. I have therefore sent a letter to the EU commission with ideas on how to cope."
Solvik-Olsen believes that inexperienced drivers are a threat to road safety, and points to the fact that Norwegian drivers have to go through extensive training courses before they can take to the roads. The politician says that if the initiative is realized, Norway will be able to prevent drivers without the appropriate road skills training from working and even entering the country.

Solvik-Olsen is hopeful a new and better arrangement can be reached with regard to road safety, but is unsure when it could be realized.

He said: "At best, it could be in place in around one year. But we are not a member of EU and are prepared that this process could take much more longer than that.”