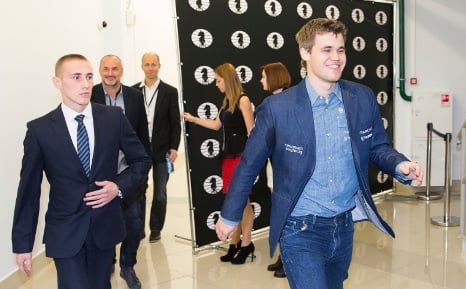 Solberg sent the following message to Carlsen after she heard the result: “Congratulations on having defended the World Champion title in chess! Norway is proud of you.” Minister of Culture, Thorhild Widvey was also among those congratulating Carlsen after deciding the World Championship in the eleventh series game against Vishy Anand.
Widvey said after his victory: “Congratulations to Magnus Carlsen with his defence of the World Champion title!”
Timeline of a Champion: Magnus Carlsen
1990:   Born November 30th, in Tønsberg. Raised in Bærum, Oslo.
2004:   Grandmaster in chess at 13-year-old.
2006:   Ranked among 100 best chess players in the world.
2007:   As a 16-year-old, Carlsen beats then world number one, Veselin Topalov.
2009:   The youngest ever World Champion in speed chess.
2010:   Carlsen is 19-years-old when he ranks as world number one for first time.
2013:   Achieves the highest ever number of ranking points (2872).
2013:   Become the first Norwegian World Champion in chess after his 6.5-3.5 victory against Vishy Anand.
2014:   Defended his World Champion title after a 6.5-4.5 victory against Vishy Anand. Earlier this same year, wins blitz chess and speed chess titles.