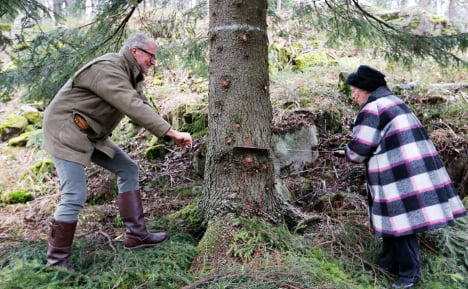 The towering 21-metre tree was planted, grown and cut down in Lilomarka, north-east of Oslo.

Oslo's Mayor Fabian Stang felled the tree with the help of the Mayor of Westminster, Councillor Audrey Lewis, who made the trip from England for the event. Lewis will also lead the ceremony at Trafalgar Square, London when the Christmas tree is lit up by city councillor Stian Berger Røsland on December 4th.

Lewis said just before the sawing began: “We very much look forward to the tree's arrival. This is when Christmas truly begins.”

To estimate the age of this year's fir tree, the Oslo mayor got help from students at Ammerud school and Oslo International School to count the grains of the tree.

Among the young helpers was 10-year-old Princess Ingrid Alexandra, who, in addition to counting the rings, also sang Christmas carols together with the other students. It is believed the tree is between 45 and 50 years old.

Stang believes that the Christmas tradition between Norway and the UK is important for both Norwegians and the British. He hoped the tradition will last for many years ahead.

Every year since 1947, Oslo has sent a large Christmas fir tree to London in thanks for British hospitality and help during World War II. The Norwegian fir in Trafalgar Square has become an emblem of Christmas joy for visitors of the popular attraction.