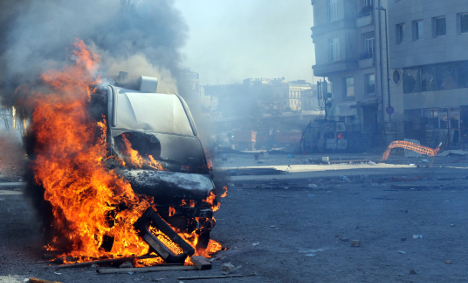 The latest Norwegian casualties in the war in Syria. Photo: Shutterstock

Both men travelled to Syria from Norway to fight for Isis against the US-led coalition.

The first victim was a 24-year-old Eritrean Norwegian and the other a 23-year-old person whose identity was not disclosed, said TV2.

The Norwegian TV channel reported that the 24-year-old came to Norway alone as an asylum seeker to Norway from the African country. The man has been in Syria for one of the longest stays of all known Norwegian citizens.

Tor Bach, editor of the website “Vepsen” (“The Wasp”), knew the 24-year-old before he was radicalised and also met him several years later.
Bach said: “At that time, he was an angry young man who had changed completely.”
PST, the Norwegian Police Security Service, estimate that more than 60 people have travelled from Norway to Syria to fight. Before the latest casualties were reported on Tuesday, PST believed that around ten of those going have been killed.
The typical person who goes to fight in Syria is a man in his twenties with family background from a country in the Middle East. Some of them are women, while an increasing amount of Syria-farers are Norwegians who converted to Islam, said NTB.