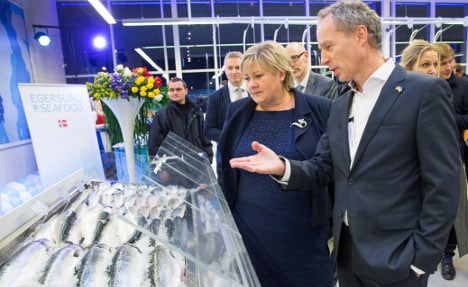 Solberg's statement was made during her visit to the Ukraine's capital, Kiev this week.

She opened a Norwegian-Ukrainian business forum, together with Ukraine's Prime Minister Arseniy Yatsenyuk.

Yatsenyuk was keen to encourage Norwegian companies to invest in his country.

In response, Solberg said to NTB: “I encourage Norwegian businesses to look at the investment opportunities [in the Ukraine], but must also be clear on that we don’t tolerate corruption.”
“Ukraine's authorities are occupied at the highest level fighting corruption. But I guess this is still an old culture that lies in other parts of the culture.”
Ukraine has had problems with corruption and the country is placed 144th on the Transparency International's Corruption Index.
The problem of bribes in business  occur both in public and private sectors. But Solberg feels safe that Ukraine's new pro-Western government is serious when it announces its hard stance against corruption.
Solberg said: "The government here has a very clear agenda, and they are very open and honest on saying this is one of their greatest problems. They are forced to fight it and have tried doing so with legislation. But it is an enormous task removing corruption.”
In addition to promoting trade cooperation, Solberg promised 100 million kroner in budget support to Ukraine this year. The Norwegian government is aiming at providing similar support both next year and in 2016.
"We will, of course, follow the money closely, it is an important part of giving. It also means that those further down in the system, putting things into practice, will know that there is not so many [problems] getting in the way.”
Ukraine is for many Norwegian companies a large export market. However, in addition to the corruption problems, armed conflict in the East, the conflict with Russia, and an economy in almost freefall has made the country a more insecure market during the last year.
Ukraine's dependency upon Russian gas is one of the problems that the country wants out of. It has asked help from Norway to supply energy and to push forward a new possible gas pipe from Denmark via Poland.
Statoil made a short term agreement this autumn to deliver a limited amount of gas to the Ukrainian company Naftogaz via Slovakia. According to Yatsenyuk, his country will vote on a law making it possible for Norwegian companies to invest directly in Ukrainian gas infrastructure.