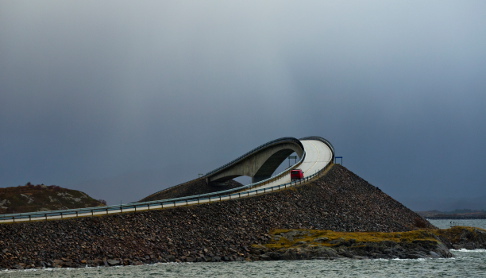 But why was this rather unflattering tourist destination in Atlanterhavsveien (Atlantic Ocean Road) south-west Norway voted “the most dangerous road” anywhere?

A video taken from the spectacular 8.3km road between Molde and Kristiansund has gone viral on the internet.
Watch the video here:
More than seven million have watched a YouTube video about the road over the past few weeks, and the road got the title “the most dangerous road in the world” on the Nocarnofun website this month.
Nocarnofun stated in their review of the road: "Bends, wildlife and spectacular scenery are the ingredients that transform an Atlantic road trip in one of the most beautiful experiences of your life!”
The location of the road has also had a historic fear factor. In the 1980s, construction work was disrupted many times as no fewer than 12 hurricanes affected the road, reported Visitmolde.com
And it isn't only on the road that accidents happen. In 2013, a 70-year-old Israeli tourist was swept away by the ocean currents surrounding the road after he fell in the water while admiring the spectacular view from the roadside.

Aside from being one of Norway’s most visited tourist attractions, the spectacular road is also popular with car makers worldwide who use the stretch to shoot advertisements.