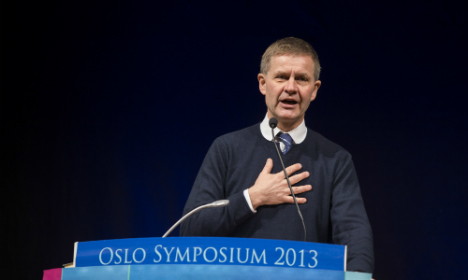 President Mahinda Rajapakse told a public rally on Saturday that he wanted Oslo to probe the role of Erik Solheim, a former Norwegian international development minister and a peace envoy to Sri Lanka.

Solheim failed to secure a peace deal despite arranging a truce which broke down in April 2006. Three years later, Sri Lankan forces extinguished the campaign for a separate homeland in a controversial military campaign.

Rajapakse in his address, a copy of which was obtained from his office on Sunday, said Solheim gave money to the guerrillas even while peace moves were underway.

Solheim, a key figure who led Norwegian peace efforts between 1999 and 2006, recently announced his willingness to give evidence before any international tribunal investigating Sri Lanka's war record.

Sri Lanka crushed the Liberation Tigers of Tamil Eelam (LTTE) by May 2009 in a massive military operation that also triggered allegations that troops killed up to 40,000 Tamil civilians, a charge Colombo denies.

"Solheim told me that our forces will never be able to defeat the LTTE. He said (leader Velupillai) Prabhakaran is a very very clear man. A military genius," Rajapakse said.

"Today Solheim is trying to jump up and give evidence against us. The Norwegian government should investigate his conduct. We have evidence of him giving money to the LTTE. We are ready to share that evidence."

In June, Solheim said atrocities were committed in the final months of the war, including shelling of hospitals in the battle zone and executions of surrendering rebels.

The UN Human Rights Council in March voted in favour of setting up an international probe into Sri Lanka's war record.

Sri Lanka invited Norway to broker peace in December 1999 and a ceasefire arranged by Oslo was torn up after Tamil Tigers tried to assassinate then army chief Sarath Fonseka in April 2006.