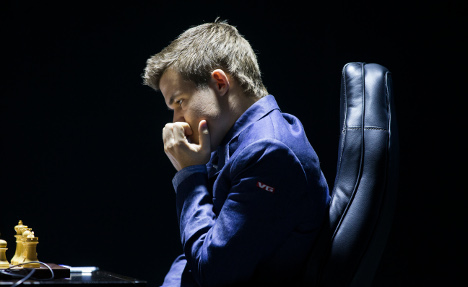 Carlsen admitted he endured a feeling of “full panic” after the Norwegian made a rare but potentially game-losing mistake during the sixth match of the World Championship. But luck was on the 23-year-old's side as he still managed to earn his second victory and move into the lead over Anand.

Around two hours into the game, the reigning World Champion made a bad move when he moved his king. It was a big opportunity for Anand, but the Indian did not take advantage.
Carlsen said at the press conference after the game when asked about his mistake: “It was just a feeling of full panic, but sometimes you're very lucky and get away with it.”
Game six lasted over three hours and on the 38th move, Carlsen claimed checkmate and his second victory of the championship.
Anand described the game as “quite miserable” and explained why he didn't see Carlsen’s mistake: “When you don’t expect a gift, you might not take it.”
Carlsen’s manager, Espen Agdestein, said to NRK that he felt 'sea-sick' after he saw Carlsen's mistake, but that he was happy that Magnus managed to win.
After six games, the score is now 3.5  to 2.5 points in favour of the Norwegian.
The next game in the series will be played Monday.