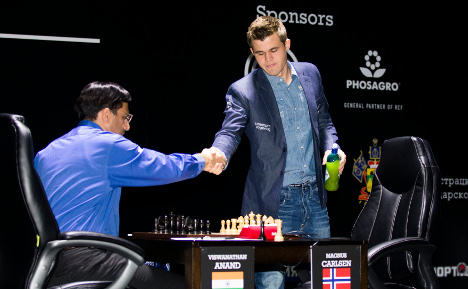 The Norwegian started with the white advantage but found himself under attack early game as India's Anand went on the offensive.

Experts commentating on the game were critical Anand had lost his confidence early in the tournament, but the Indian seems to have regained his strength.

On Monday, Norwegian chess grand master Simen Agdestein commented that it appeared Anand was struggling with his mental shape and looked unsure.

Carlsen played a more safe and careful opening as the game moved towards the players battling it out for board position.

After the 40th move, both players earned one additional hour for moves during the game.

An exchange of knights between the players pointed towards a draw and, on the 47th move, there was a "repeat move" ending the game in a draw.

The series is now tied at two points each and the first player to reach 6.5 points or more takes the title.

The 5th World Championship chess game will be played on Friday of this week.