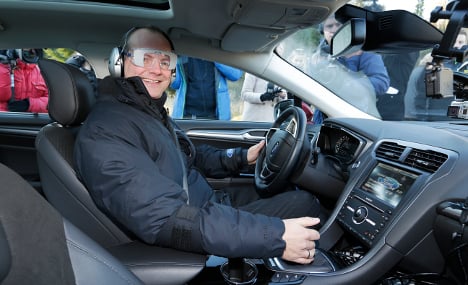 Wearing a special suit and goggles, Solvik-Olsen got to feel how it was to drive a car under the influence of alcohol.

The Progress Party MP said after trying to drive the car: “Suddenly there were a lot of cones out there. Then the challenge is to figure out which cone is the real one, and to aim for it.”
NAF (Norges Automobil-Forbund – Norwegian Automobile Federation) and Ford were behind the simulation. By help of a so-called drunk driver simulation suit with weights, earmuffs and goggles producing double vision, the teetotal politician was to feel himself how it was to drive a car under the influence of alcohol.
The PM concluded after the drive: “People are supposed to have a good time and have fun, but take a cab or a bus home after you left the party.”