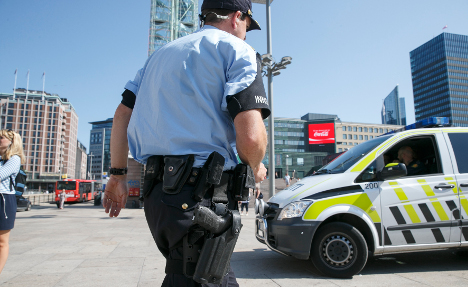 This summer Oslo was under increased security after PST placed the country on 'high alert' from a terror threat. Photo: Heiko Junge / NTB scanpix

The Police Intelligence Service (PST) has issued a new threat assessment which places Norway at a higher risk now than in the summer.

PST stated on its website on Wednesday morning: “Within the next 12 months it is likely that terror attacks could be threatened, and attempted, in Norway.”

The government organization has cooperated with other anti-terrorism departments to produce an upgraded threat evaluation that has been distributed to relevant departments and agencies.

PST said: “Based on current trends in the objectives of extreme Islamists, as well as the threat posed by Isis, Norway's military personnel, police and some political figures could be targets. The police and PST will evaluate risk-reducing measures within their respective areas of responsibility.”
Newspaper VG said that the Norwegian government’s security staff and several police districts have been informed about the increased terror situation during the last 24 hours.
In the national budget presented in October, Minister of Justice Anders Anundsen warned that “the terror threat against Norway is considered to have increased”.

Extremists in south-eastern Norway pose the greatest threat within the country's borders, according to the justice ministry
PST has revealed a number of arrests have lately been made in Western countries in order to stem terror attacks, and several of these arrests are linked directly or indirectly to the terrorist organization Isis and the conflicts in Syria and Iraq.‏

"The common features of their [terrorists'] plans have been to attack symbolic Western targets with simple means."‏
PST pointed out: “The situation has escalated during the last month.”
Isis in September this year published a speech encouraging its followers to commit attacks in all countries in the US-led alliance against the terror organization, PST said.
“In the speech, Isis specifically encouraged attacks on military personnel, as well as members of police, security forces and intelligence services," PST said.
"The appeals made in the speech need to be seen in the context of changes to the modus operandi of extreme Islamist terror in Europe in recent years.”