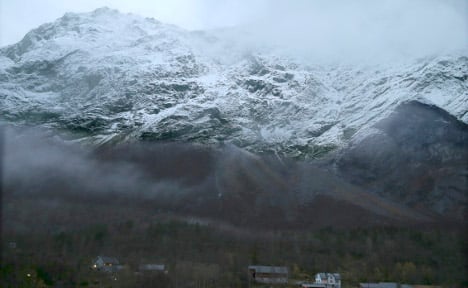 Chief geologist Lars Blikra said during a press conference on Thursday morning: “The high risk part of the mountain has had fewer movements after the acceleration phase and the large movements we saw on Tuesday.”

The snow now covering the 1,200 foot mountainside has been a challenge for the geologists. But on Thursday clear skies and cold weather prevailed, which made it easier to measure the movements on the mountain.
Blikra said: “We still measured movement in the [endangered] part of the mountain of around 1.5 centimetre each 24 hours.”
He believes that if the weather remains as it is, the speed of the movement will probably keep stable over the next few days.
Meanwhile, it was revealed on Thursday that it may take a long time before locals who were evacuated from under the mountain are allowed to move back home.
The last days have been nerve-wracking for the inhabitants of Rauma. Heavy rainfalls have triggered large movements in the rock masses of Mount Mannen, and at worst it was warned that an avalanche of around 120,000 cubic metres of rock could tumble off at any time.
On Friday, the local government will hold a meeting with the affected locals.
Mayor Lars Olav Hustad said: “It is time to find a more permanent solution for them.”
“They live well, as it is now, but we need more permanent solutions for the future and when the winter comes,” said Hustad.
Around ten people have been evacuated and cannot return back to their homes in the near future.
The mayor said the evacuees were affected by the uncertainty.

“'What will happen to my house? When can I move back? Will I ever come back again?' These questions have been in their thoughts through the whole incident. At the same time they have challenges related to accommodation, clothing and washing; all the everyday necessities we usually don’t think so much about. In this way, it has been tough for them, but they have handled it very well. I'm impressed by them.”

According to the mayor, the local administration has turned to the Norwegian Water Resources and Energy Directorate (NVE) to evaluate the possibility of using water to trigger the avalanche, reported NTB.