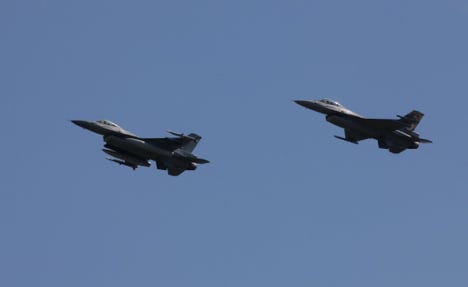 Two Norwegian F-16 fighter jets were on patrol keeping an eye on the Russian aircraft flying over the Norwegian and North seas, close to Norwegian air territories.

Six of the airplanes turned around after their cruise, while two of the bomber planes continued southbound over the North Sea, parallel with the Norwegian border. British and Portuguese fighter jets took over the observation job from the Norwegians.

On their return, the Russians flew west of the UK.
No Nato members were informed in advance of the Russian exercise, and the airplanes didn't send positioning signals nor had radio contact with civilian air traffic control.
There has also been extensive Russian activity over the Baltic Sea during the last few days. Latvia's defence department reported twelve Russian airplanes in all flying overhead, among them the advanced MiG-31 fighter jets.
Turkish air defences sighted another four Russian airplanes over the Black Sea, and the Russian craft were spotted by Nato radars.